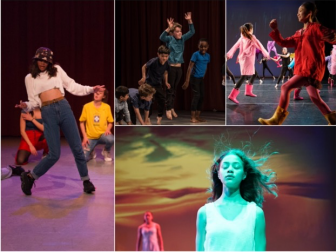 SAN FRANCISCO, CA, April 25, 2022 – ODC School is pleased to announce the program for its Youth &  Teen spring showcase featuring the premiere of IN THIS LIGHT, co-directed and choreographed by ODC  faculty Kristin Damrow and Lindsay Leonard. In This Light shares the bill with several short works by  students representing a range of classes, from hip hop to ballet and tap. This program runs May 14 – 15  with two matinees each day. On Saturday, the shows start at 1 and 4 p.m., and on Sunday at 11 a.m. and  2 p.m. Tickets, starting at $10, are now on sale at odc.dance/InThisLight.

In This Light is the culmination of ODC School’s “Step Onstage” class led by Damrow and Leonard. Over  the course of the past academic year, students, ages 9 to 15, have received technical and artistic training  across a range of skills from dance composition and choreography to the elements of stagecraft,  including lighting, costumes, props and the use of multimedia components.

“In past years, Step Onstage prepared students to rehearse and perform a work from ODC’s repertory,  namely ODC School Director Kimi Okada’s Uncertain Weather,” said Leonard. “This year’s class  undertook the ambitious goal of creating a new work from scratch, and it has truly been a collaborative  project. Kristin and I charged the students with contributing movement ideas, which we distilled and  edited into the final work.”

The final 30-minute piece documents the students’ exploration of light and time, from the sun’s first  rays to evening’s dusk. “In This Light is a response to the alteration of our days during the pandemic,”  said Damrow. “The cancellation of in-person classes and performances, as challenging as that was for  many of us, had an upside, too. By slowing us down, and keeping us confined largely to our homes, it  heightened our awareness of small details like the subtle changes of light throughout the day. In This  Light is in a way a celebration of the power of attention and the joys of finding oneself attuned to the  present moment.”

The second half of the Youth & Teen spring showcase will include a rotating array of 18 works, each  between three and five minutes in length, performed by students from other classes. Each matinee will  include a different group of students.

Among the youngest students are those participating in ODC’s “Welcome to Hip Hop” for six- and seven year-olds. Angelica Perez teaches this class as well as two other sections of hip hop dance for older  youth and teens, both of which will also perform. Bruce Biada teaches tap, and students from two of his  classes will perform, as well. ODC offers ballet at a range of levels, and three classes will perform in the  spring showcase: “Pre-Ballet” directed by Sasha Gologorskaya, “Ballet Variations and Repertory”  directed by Coral Martin, and “Ballet II” directed by Corie Altaffer.

Other classes showing work include: “Dance Around the World” directed by Tania Santiago; “Youth  Contemporary I” directed by Michelle Lynch; “Boys’ Dance” directed by Clint Calimlim; and “Kid Dance”  directed by Theresa Knudsen and Bethany Mitchell.

"Next month's showcase is significant because it marks the first time that ODC School has joined  together two events which were previously separate," said ODC Director of School Programming Carlos  Venturo. "The first half by the Step Onstage class is fully produced while the second half is more  informal. Together, the two halves will make for one joyous celebration to the end of the school year."

Since 1996, the ODC School Youth & Teen Program has offered young people a broad range of classes in  dance and music with a focus on technique, invention and performance. Among the varied classes  available are contemporary dance, ballet, hip hop, tap, as well as Afro-Brazilian and West African Guinean. For more advanced students who are interested in performance, the ODC Dance Jam is the  School’s contemporary dance company open to teens by audition; Seeds is the School’s hip hop dance  lab for teens; and The Velveteen Rabbit is ODC’s annual winter production featuring young people  alongside the members of ODC/Dance. Before the pandemic, ODC School offered more than 200 classes  per week, 365 days a year to 16,000 adult students and 750 youth and teens. Today, the School has  shifted to a hybrid model of instruction with an expanded portfolio of classes in dance, music, health  and fitness available both on campus and online.

ODC School presents its spring Youth & Teen spring showcase featuring the premiere of In This  Light co-directed and choreographed by Kristin Damrow and Lindsay Leonard.

To purchase tickets online visit odc.dance/InThisLight or call the box office at 415-863-9834.

For all press inquiries please contact John Hill at johnhillpr@gmail.com.